We are using cookies to give you the very best online experience and by using this site you agree to us doing so. For more details of these cookies and how to disable them please click here. To help you understand what information we might collect about you and how we use it, please click here.

Caring for the local communities we serve.

With schools enjoying the summer break, the West Brom is likewise taking a breather from the Money-Go-Round, a presentation we’ve developed over the past four years to increase the awareness of young people when it comes to money matters.

In that time, the Money-Go-Round has been presented at more than 30 schools, both at secondary and primary level, right across our operating region.

Indeed, just before the curtain came down on the academic year, we presented the Money-Go-Round at the Q3 Academy in Great Barr, Dormston School in Sedgley, and St Andrews Primary School, near to Wolverhampton city centre.

And as soon as the new school year springs into action in September, we’ll be raring to go too with sessions lined up at St Mary’s Primary School in Kingswinford, Birchensale Middle School in Redditch, and the Phoenix Academy in Stone Cross.

Yet, while the Money-Go-Round has stopped for the moment, that doesn’t mean the Society’s involvement in the community has ceased over the holiday period. Far from it.

As you can see from an array of activities, we’ve been working hard to live up to our reputation as a building society that genuinely cares for the communities we serve.

The Society’s support for Midlands Air Ambulance Charity (MAAC) is a prime example where our staff’s commitment and compassion really comes to the fore.

To date, we’ve had a feast of fundraisers in aid of our chosen charity for the financial year – football tournament, golf competition, and obstacle race…to name just a few activities where staff have really thrown themselves into the fun of fundraising but without ever losing sight of its very serious purpose: supporting the life-saving work of MAAC, which averages 2,000 missions annually in responding to emergencies where there’s a potential fatality or major trauma injury.

Over the course of the coming months, different departments at the West Brom will be holding various events – cake days, bingo, funfair, quizzes, festive fundraisers such as Breakfast with Santa – with chief among them our Go Red Day on Friday 4 October when, both at head office and in our branches, we’ll be reserving a special day of support for Midlands Air Ambulance Charity.

There are countless community causes, many responding to the needs of people at a local grassroots level.  It may be a bereavement counselling service or a charity that helps people with mental health issues; perhaps autism or a support group for people living with cancer; an organisation that works with homeless people or victims of domestic violence.

So many instances of individuals facing difficulty and disadvantage but where the Society through its charitable arm – the Mercian Community Trust – can offer precious assistance.

In so many ways, such financial support shows how relatively small-scale projects can have a big impact, thanks to timely funding from the West Brom, something that will remain a valuable element in our community outlook. 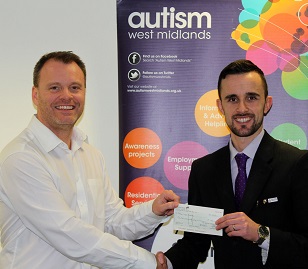